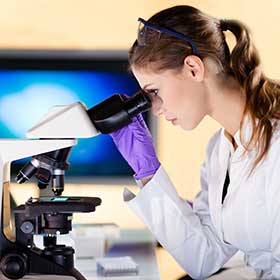 NAMPT Enzyme – Enzyme Deletion. The compelling results of a study conducted by a team of researchers at the University of Copenhagen indicate it may be possible to permanently turn off the body’s ability to generate fresh stores of fat and make it possible to eat high-calorie food without gaining weight.

Laboratory-based studies involving mice suggest winning the war against obesity could be won by genetically deleting an enzyme called NAMPT, which is normally located in the body’s existing stores of fat.

In fact, after 12 weeks of eating a diet that was the mouse equivalent of burgers and pizza, the genetically modified mice maintained their normal weight and the researchers state it was impossible for the modified mice to do otherwise.

“NAMPT in fat tissue was likely once an extraordinary benefit to our ancestors,” says Zachary Gerhart-Hines (corresponding author on the study). “But in today’s society full of high-fat, calorie-rich foods, it now presents a liability.”

What the Researchers Did

The study involved two groups of mice. One group had been genetically modified to erase NAMPT. The other group remained in the way Mother Nature intended. During the initial stages of the study, both groups of mice were fed a diet that was low in fat and calories and all the rodents maintained similar weights.

After 12 weeks, both groups of mice were switched to diets that were so laden with fat they could be compared to a human living on junk food.

This calorie-rich feeding pattern was maintained for a further 12 weeks and the normal mice responded to it by gaining weight and becoming obese.

All of the genetically modified mice maintained the same weight as when they were eating a low-calorie diet because their lack of NAMPT had made it physically impossible for them to gain weight. Furthermore, lack of the enzyme appeared to provide the mice with superior control of their blood glucose levels, which should have been fluctuating badly due to the kind of food they were eating.

“We gave the mice a diet that more or less corresponds to continuously eating burgers and pizza,” Karen Nørgaard Nielsen (first author on the study) explained. “Still, it was impossible for them to expand their fat tissue.

Our ultimate goal is that by better understanding these fundamental underpinnings of how we [humans] become obese, we can apply our finding to the development of novel treatment strategies for metabolic disease.”

Potential Value as a Treatment for Obesity

Unfortunately, despite the promising nature of the results obtained, the researchers say the treatment is not a suitable weight loss therapy for humans. NAMPT is integral to many human organs and tissues, so purging it from the body could cause an unpredictable range of side effects.

Further research is planned to fully investigate the way a deficiency of NAMPT is able to inhibit fat storage and prevent obesity.

The researchers hope a better understanding of all the mechanisms involved will furnish them with the information they need to develop anti-obesity treatments capable of interfering with the body’s ability to store fat, and do so without causing any of the broader health issues that would occur if NAMPT were entirely removed from the body.