Why You Might Buy It: Contains some good ingredients. Should be able to prevent sugar and carb urges

Why You Might Not: Ripped Rooster may help you drop a few extra pounds per month, but you’re likely to still feel hungry a lot of the time.

Our Opinion: Good product – but our opinion is there are better products.

Ripped Rooster! What a name! How the people at Hum Nutrition came up with that one is anybody’s guess.

If there’s ever an award for the most creatively named fat burner, Hum has a good shot at winning the prize.

Unfortunately, looking at the overall strength of the formulation being used in Ripped Rooster, the Hum research and development team don’t appear to have much to crow about.

It’s a combination of chromium, green tea, and Keto-7 and, although the first two ingredients are highly respected diet pill ingredients, Keto-7 does not pack as much power as most of the other fat burning ingredients Hum could have chosen to use instead. 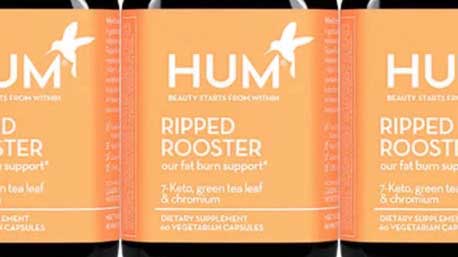 Fat burning diet pills like Ripped Rooster contain ingredients that have been chosen due to their ability to cause the body to burn extra calories.

This can help create an energy shortage that is sufficient to cause the body to begin using its stores of fat as a source of fuel.

Ripped Rooster is a thermogenic fat burner so, although it’s designed to boost the metabolism, it also has the ability to raise the body temperature sufficiently to cause extra calories to be lost from the body as heat.

Usage Guidelines – Only two capsules are needed per day. That’s one in the morning and one at night and its recommended the capsules be taken with food.

The only Ripped Rooster customer reviews we could find are the ones being showcased on the manufacturer’s website.

All of them are very praising of the product and its abilities, but reviews published at such a biased source cannot be relied upon to paint an accurate picture of how well the product is likely to perform for the average customer.

Hum fails to state if any side effects have been reported, but Ripped Rooster is unlikely to be suitable for women who are pregnant or nursing a child, and it’s always good practice to ask a doctor for advice before using any brand of supplement for the very first time or making any radical changes to the diet.

A doctor’s input is especially important if any medical problems are suspected or have already been diagnosed.

Anyone who is thinking of using Ripped Rooster alongside medication or other supplements would also be wise to ask a doctor for advice before doing so.

Where to Buy Ripped Rooster

Ripped Rooster appears to be exclusive to the manufacturer’s website, but it’s slightly cheaper than most other diet pill options and customers are provided with a free nutrition report and access to a personal nutritionist.

There is no money back guarantee.

Hum Ripped Rooster is a diet pill that should be able to prevent sugar and carb urges but does not contain any appetite suppressing ingredients.

So, if your calorie-controlled diet leaves you feeling hungry, Ripped Rooster won’t be able to help. On a more positive note, green tea is a good fat burner. It works.

That’s why it’s such a popular diet pill ingredient, but the amount included may not be enough, so the formulation may be overly reliant on 7-Keto.

Although 7-Keto appears to have fat burning capabilities, we don’t think it’s as good as some of the more popular fat burning ingredients.

The fact that it’s not included in any of the leading diet pill formulations suggests diet pill manufacturers are not sold on its capabilities either.

However, if you are already losing weight by diet and exercise, Ripped Rooster may help you drop a few extra pounds per month, but you’re likely to still feel hungry a lot of the time.

Buying a separate appetite suppressant could be a good way to get the extra support you need, but it would make more sense to buy an all-in-one product capable of offering a superior range and level of benefits.

We review all diet products and rate them accordingly. We use certain criteria to order the best products.