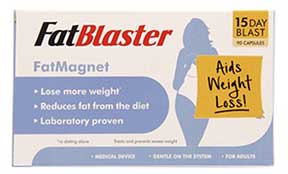 FatBlaster FatMagnet – acts as a fat blocker. To put that in simple terms, it’s designed to absorb fat so you don’t have to.

Why You Might Buy It: Made by a long standing company in the diet and weight loss industry. Some quality ingredients in the formula.

Why You Might Not: In the fat blocker genre there is one product that at the moment is leading the market in many countries

Our Opinion: Good product – but our opinion is there are better products

To put that in simple terms, it’s designed to absorb fat so you don’t have to.

Each gram of fat that’s digested and absorbed in the normal way provides nine calories. Once you know that it’s easy to understand the potential value offered by this kind of product.

The FatBlaster range of weight management products is marketed under the Naturopathica brand name and the company has created a special FatBlaster website to provide more information about the various FatBlaster options available and direct interested parties to an online store that sells their products. Other products include FatBlaster Clinical

Naturopathica is a respected brand, but customer reviews suggest this may not be one of the company’s better products. 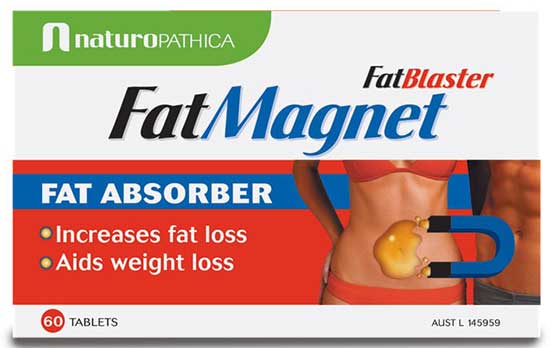 What Is FatMagnet and How Does it Work?

Also known as fat blockers, fat absorbing products like FatMagnet are often powered by ingredients the human digestive system is incapable of processing.

In order to function as an efficient fat blocker, ingredients of this kind also need to have the ability to absorb fat that has entered the body with the food. There are not may ingredients that have this ability.

The two best ones are nopal and chitosan. Fat Magnet uses chitosan.

The chitosan used in FatMagnet has been diluted with other ingredients, but, it’s ability to absorb fat should allow it to carry a percentage of any fat that has been consumed through the intestines in an undigested state. It will then leave the body with the stool, taking the trapped calories with it.

The recommended dose is two capsules, three times per day, 30 minutes before meals.

People who want maximum benefits are told they can increase the dose to four capsules, taken 30 minutes before meals.

The FatMagnet usage guidelines also point out the product may reduce the effect of medication, and stresses the importance of leaving a 60 minute gap between the FatMagnet dose and the dose of any medication that is being used.

Some customers say FatMagnet worked for them, others state it did not.

“Fatmagnet works. It helped me to lose 12 pounds in 3 weeks. You need to cut back on fatty food and take the maximum dose but it works.”

“I used the tablets for 10 days and never lost any weight. All they did was cause me to leave a greasy tide line in the dunny.”

“6 tablets a day was not working for me, so I increased the dose to 12. I’m losing weight now, but this is a super expensive way to do it.”

“I followed the instructions, but fatmagnet is a waste of money. It didn’t help me at all.”

FatMagnet is intended for people who are aged 18 or older. It’s not recommended for women who are pregnant or nursing a child.

Potential users who have existing health problems, and anyone using medicine, should get a doctor’s approval before using this or any other weight management product.

Using fat absorbing products like FatMagnet can cause the body to become deficient in fat soluble vitamins, so a vitamin-providing supplement may be required as well.

It’s also important to stick to a low-fat diet when using fat absorbing products because giving these products to much fat to absorb can cause sudden bouts of diarrhoea.

This product should not be used by anyone who has allergies to seafood.

Like all FatBlaster products, FatMagnet is not a difficult product to find.

Unless you’re living in the outback you will probably be able to buy it from your local pharmacy and you can also buy FatMagnet online from health365, Chemist Warehouse, Pharmacy4Less, and many other online retailers.

However, using FatMagnet is not a cheap way to lose weight.

Taking two tablets three times a day will empty the box in only 10 days. Using the maximum dose of four tablets, three times per day will empty it at double speed. That would make it possible to use six boxes of FatBlaster per month.

There is no money back guarantee.

Chitsoan is undoubtedly the ingredient that offers the most value here, but the average dose used in supplements is around 3.7g per day.

Anyone who takes six FatMagnet tablets per day will not obtain this, but people who take 12 tablets will.

This suggests the people who had poor results may have been taking six tablets per day and the ones who saw the most benefit may have been using 12.

That means customers will need to be looking at buying six boxes of FatMagnet per month. Perhaps Naturopathica may have been better off losing the other ingredients in favour of a higher dose of chitosan.

FatBlaster FatMagnet may be capable of providing the promised fat absorption, but, with a need for six boxes per month, it’s going to be an expensive product to use. 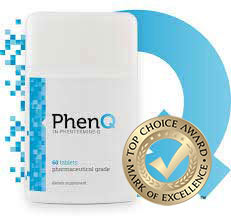 PhenQ is arguably the most successful fat blocker currently available.

It is a very effective fat blocker.

PhenQ doesn’t rely just on it’s fat blocking capabilities though it can also burn existing body fat and also reduce your hunger by acting as an appetite suppressor.

Jane Wright has a wealth of experience in the supplement industry. She has been on both sides of the fence by first helping to create products and then critically reviewing them. Jane is a keen fitness fanatic and hates the current trend of fad diets. Jane’s No1 tip – Avoid products with hype and trendy new ingredients, tried and tested is the wiser choice. Read more here